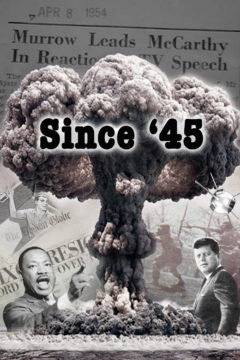 "Since '45" is a documentary on recent American history and media. It deals with how media reports, critiques, and ultimately impacts history. It covers the years 1945 through 1979 and utilizes interviews, animations, documentary footage, and music of the various eras to tell its story. Director Michael Korolenko acts as guide through a "House of History".