Home / Films / The Anderssons in Greece 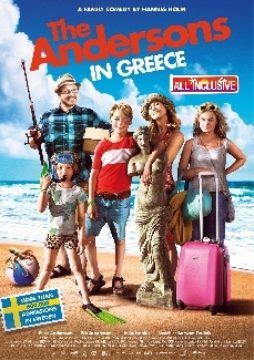 It’s a family tradition for the Anderssons to spend the summer vacation in a trailer on Mosquito Island not far from their home in Sweden. Father Rudolph, a penny-pinching, hard-working tax accountant is perfectly happy with this cheap and uncomplicated tradition, but he is well aware that his wife and three children can’t bear the thought of going there again. When his boss offers him the chance to attend a conference in Greece this summer and allows him to take the whole family at the company’s expense, Rudolph makes a big scene announcing the change of holiday plans to his family who, for once, treat him like a hero.

Just as everyone starts to repack their suitcases and make last minute shopping plans, Rudolph receives a call from his boss who cancels the trip to Greece saying that he now plans to go there himself with his wife. As Rudolph doesn’t have the heart to face his family’s disappointment, he reluctantly digs deep into his own pockets to pay for a trip to Greece. Thus, the family embarks on a turbulent adventure into completely foreign territory. His 12-year-old son Sune takes a break in the relationship with his girlfriend in case there’s any holiday romance. At first, however, has a hard time finding his “pulling power” and struggles to actually let go of his girlfriend.

His mother Karin meets a childhood friend who has dumped her husband and is now living a new life with a new man, Pontus. On the surface, he seems exciting but her older daughter Hedda detests him and he turns out to be hiding a secret. Sune develops a crush on Hedda and, together with his siblings, helps her to reveal Pontus’ secret. Meanwhile, father Rudolph draws up a detailed schedule of all the activities his family has to do and all the food they have to eat in order to make up for the cost of their all-inclusive holiday.