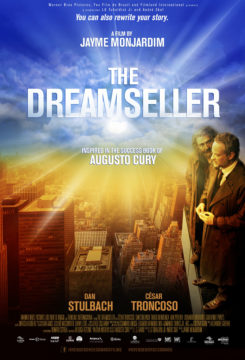 Based on The Bestselling Book "The Dreamseller" written by world renown Brazilian psychiatrist and psychotherapist Augusto Cury. A phenomenon that sold more than 30 million books in 60 countries and a great success in China, Germany, Russia, Ukraine, Spain, Mexico and Portugal, and others...The book was elected Intl Fiction of the Year in China. A feel-good movie, for family and wide audiences, it was successfully released in Brazil, being at the top #10 Box Office. Distributed by Warner Bros in LatAm.

Júlio César stands on the ledge of a 20-story building poised to jump when he's suddenly joined by a mysterious, disheveled stranger, a "dreamseller," whose mission is to convince people to love life. A philosophical dialogue follows as the stranger talks Julio down from the ledge and invites him to become a dreamseller. At first Júlio views the journey as a "sociological experiment," but he soon begins to believe. Others join, and the "band of misfits" under the tutelage of the dreamseller visit sites as diverse as a retirement home and a funeral, delivering a lesson each place.The dreamseller points out the madness in modern society and invites others to embrace his ideals. As his influence grows, detractors emerge, but he has an answer for everyone, until Megasoft, the corporate monolith and a favorite target of the dreamseller, forces him into a corner.