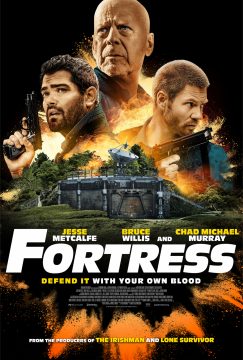 Retired spy Robert Carter Michaels (Bruce Willis) is considered one of the most important CIA agents in history. When his estranged son Paul (Jesse Metcalfe) surprises him with a visit after years without contact, he discovers his father's secret identity and learns his secluded residence is actually a highly secure secret base. Their strained reunion quickly turns deadly. Paul unknowingly led highly sought-after super criminal Frederic Balzary (Chad Michael Murray) from Robert’s past straight to the compound. While a large team of dangerous mercenaries start a vengeful assault on the base, all residence personnel take refuge into what seems an impenetrable base command center called ‘The Fortress’. Robert immediately designs a forceful counterattack against the fierce squad closing in, but he needs Paul's help defending the base. With The Fortress under siege, this father and son duo must team up to fight their way out of their dire situation, facing a hellacious amount of challenges and gunfire along the way.