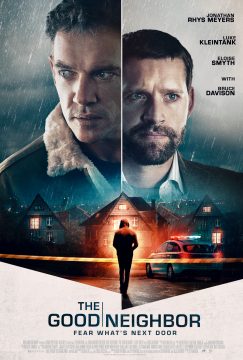 In this intense thriller, a nightmarish evening unfolds for David (Luke Kleintank), a former New York Times journalist, when he and his strange new neighbor Robert (Jonathan Rhys Meyers), accidentally hit a girl on her bike. Buzzed and disoriented, David lets Robert convince him to flee the scene and leave the girl for dead, in order to protect his career. Robert shows no remorse, and in the name of friendship he does unspeakable things to protect the secret. Now that the police are full-on hunting for the hit-and-run killer, things begin to spiral out of control when David’s local newspaper sends him to cover the story where he meets the deceased girl’s sister Vanessa (Eloise Smyth). Despite the circumstances, and her deep desire to find her sister’s killer, the two immediately have a romantic connection, which surprises and haunts David, while pushing Robert to take brutal steps to keep his new friend to himself.