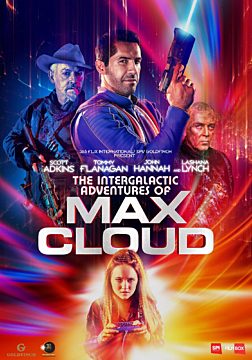 The Intergalactic Adventures of Max Cloud

A space cruiser crash lands on the purple planet of Heinous, an intergalactic prison that is home to the most vile and dangerous villains in the galaxy. All of the crew have perished except for its pilot; intergalactic space hero Max Cloud, the ships hapless chef Jake, and its reluctant Commander, Rexy. Their mission is simple, wait inside their vessel until help arrives and try their best to keep the prisoners outside from getting in, however this is Max Cloud and he doesn’t do simple. ...But this is not real life. This is a video-game, and at the helm of the adventure is Sarah, a teenage video game fanatic who immerses herself in fantasy to avoid dealing with her less than packed social life and a strained relationship with her dad, straight laced single parent Tony. After a fallout, Tony bans Sarah from playing games and in a frenzy of teenage emotion Sarah makes a wish, that in the blink of an eye becomes a reality... With a flash of pixelated light Sarah is transported into the video game by the mysterious Space Witch, who exists in an etherial void, behind a secret door, that never appears in the same place twice! So Sarah finds herself trapped inside the game and the only person who can help her is her equally socially defunct but incredibly charming friend, Cowboy, who must control Sarah from her bedroom in Brooklyn and keep her from losing her one life, in a game that can’t be paused, that they have never finished before! To make matters worse Sarah has not found herself inside the body of the wonderful Max Cloud, but Jake, that’s right... the hapless chef. We follow Sarah as she negotiates the terrifying and dangerous planet of Heinous alongside the ever confident Max and fed up Rexy, jumping back and forth with the real world as the pressure mounts on Cowboy and the real stakes start to rise. They soon encounter stranded Bounty Hunter, Brock Donnelly, and realise they must get off the planet before help arrives as the planets surface burns so hot every day that anything not underground is space liquid! AND to add to the stakes Cowboy must keep his best friend away from the evil clutches of the games villain Revengor, a part man, part machine, lunatic who is hell bent on taking Max Clouds ship and with an army of prisoners and an evil sorcersss called SHEE, his chances look pretty damn good. The action bounces between the video game and the real world as Cowboy and Sarah must come together to get her home, all leading to the ultimate showdown in Revengors lair, where back in Brooklyn, video game expertise arrives in the form of a very unlikely hero. Sit down. Plug in. It’s time to play THE INTERGALACTIC ADVENTURES OF MAX CLOUD