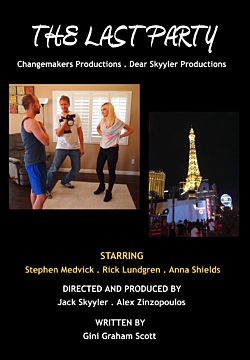 The Last Party is a dark comedy which is well-suited to a time when millions of people are facing a financial crisis and feel their world is falling apart. It is sure to be talked about and is being turned into a novel.

In the story, Dave, a formerly successful business professional has lost his job, can’t find other work, could lose his house, has lost his wife, and can’t get support from similarly strapped friends. So he decides to throw a Suicide Party with the help of his friends to raise money to save his house and get back on his feet. If he raises $100,000 he’ll live; otherwise he plans to kill himself.

Once they start to promote the party with the help of a trendy media guru, initially through friends, Facebook, LinkedIn, and Twitter, the event becomes much more than just a party. Dave is confronted by social welfare workers seeking to stop the suicide, a TV show producer who smells a good story, police officers requiring a permit, a newspaper reporter who turns an interview into a sensational international story, Jehovah witnesses wanting him to find God, and more.

Will the party be a great success? Will Dave get the money? And will he really kill himself if he doesn’t. The Last Party tells this story.

The trailer can be viewed at https://youtu.be/lPeNgzkZ7Uw

Changemakers Productions and Dear Skyyler Productions have now produced 11 films together. The other films include Me, My Dog, and I; Rescue Me; Driver; Deadly Infidelity; The New Age of Aging; Courage to Continue; Reversal; and Death’s Door. The two companies’ offerings include feature films, documentaries, and TV/film series, using online, retail, and theatrical distribution.