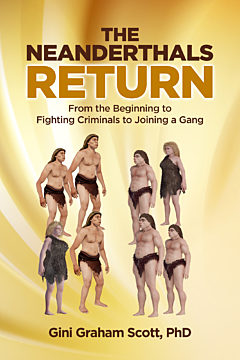 The Neanderthals Return, based on the book of the same name is a series based on the Neanderthals being brought back into modern society. In the first episode, a paleontologist in Germany, brings back some Neanderthal DNA and works with a scientist to bring back six Neanderthals. As they grow up in the lab, in a group home, and later at school, they experience a number of challenges due to being different, and their secret upbringing is discovered, when one boy goes exploring, is hit by a car, and the media descends. In the next episode, a robot factory owner learning about the Neanderthal kids, creates a workforce of Neanderthals, and after some detectives learn about them, they recruit a team of Neanderthals to help find and capture elusive criminals. Then a crime gang leader recruits and trains a team of Neanderthals to commit crimes and thwart the efforts of the Neanderthals working with the cops. The series has the wide appeal of the very popular 1980s Clan of the Cave Bear about a Neanderthal family in ancient times and the hit 1960s TV sitcom series The Jetsons, about a cartoon stone age family in the modern world. Now the series is based in the very real possibility that modern science could bring the Neanderthals back today. The film is slated to begin filming in the fall of 2021.