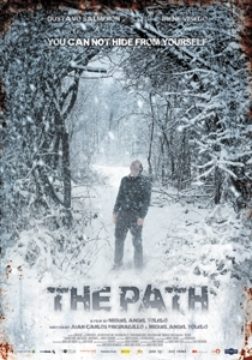 RAÚL, in a desperate attempt to salvage his marriage with ANA, suggests spending Christmas in a remote cabin in the mountains, together with their seven-year-old son, NICO. When Ana and Nico make friends with one of the locals, SAMUEL, Raúl becomes insanely jealous. He tries to get rid of the intruder but discovers, to his despair, that Ana and Samuel have been meeting on their own and seem to share some kind of secret. Raúl decides to invite Samuel to dinner on Christmas Eve, planning to expose their affair, but the evening comes and goes without conflict.
That night, Raúl has a nightmare in which he witnesses his family’s involvement in a bloody incident. On awakening, he discovers, to his relief, that Ana is innocent and that the secret meetings were to organize a surprise gift for him.
But something isn’t quite right. Looking back over the photos of that holiday, Raúl realizes that some of them show situations that he doesn’t remember ever happening. Now, Raúl will have to take a sinister trip down memory lane and face up to the terrible reality.