Home / Films / The Pillars of Heaven 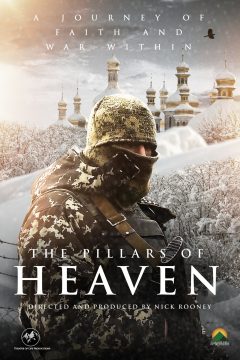 The Pillars of Heaven

A young and disillusioned British diplomat abandons his diplomatic career, spends his own money, and risks his very life on a journey of faith and war in Ukraine. A country riven in pieces by indescribable events, sometimes called: an EU inspired and US -organised revolution, a Russian invasion, a civil war, a war of lies and misinformation, a war where thousands of people have died, and which created over a million refugees, and a war at the heart of Christendom which rips the very geopolitical foundations of Europe to shreds. With the Ukrainian people (including soldiers, military priests, peacekeepers, humanitarian aid workers, refugees, church leaders, politicians/ 'terrorists', ordinary families and everyday victims of the war) as his guide, his journey takes him from the idyllic Carpathian Mountains, to the golden cupolas in Kiev to the very heart of the hellish War-zone in Donetsk. He embarks on an odyssey from Christmas Eve to the Epiphany, searching for the soul of this troubled nation and for something which might help to bring a lasting end to the bloodshed and prevent a wider military confrontation between Russia and the West.