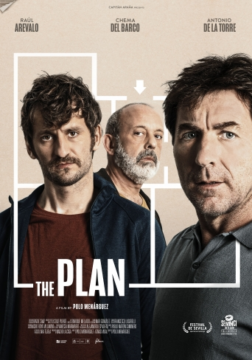 It’s 9am on a hot, summer’s morning in a neighborhood of Madrid.

Paco, Ramon and Andrade, three friends who have been unemployed since the company they worked for shut down, have arranged to meet to carry out their plan. When all three of them are finally there, an unexpected setback stops them from leaving the house: the car they were relying on has broken down.

As they look for alternative transport arrangements, the friends will find themselves caught up in a series of uncomfortable discussions, that will slowly bring down their walls and force them to take off their masks.

Andrade has just bumped into the person whose absence has marked his whole life in a bar, Paco is about to discover a painful secret about his marriage and Ramon is obsessed with a series of psychological questions nobody else understands.

The answer to these questions and the revelation of each of their personal suffering will change their friendship forever. Meanwhile, with each second that passes they get further and further away from executing their plan.