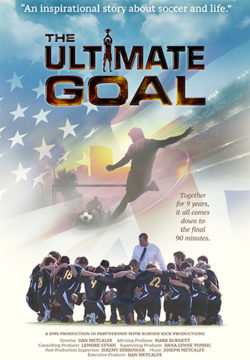 Players are about to end their team history as they age out and head to college. Together for 9 years, they attempt to win the National State Cup Championship in Southern California as their final memory.
Dan Metcalfe - their Coach since day 1, has decided to take the team to England to face the top professional U18 football teams before their final games in America. A true test of the Youth of America vs the Youth of England in Football.

The DMS11 Academy Players have never traveled abroad together and the lessons they experience will make them, or break them. Their amazing story of team, brotherhood, adversity, real life and passion will touch the heart of any viewer who has a love of sport, family and dreams. The team faces loss of friendships, characters are tested, opponents deal them truth, distractions test unity, and immigration laws wreck a fairytale hope. Can the players reunite and finish their journey with a dream ending?

A TRUE story that is far beyond a movie script and defies the odds. Be Inspired and know that if you dream, work and believe, the power of Team can overcome all. The Show includes a powerful, inspirational talk from The Brilliant TV Producer of Survivor, Apprentice, Shark Tank / Dragons Lair, The Voice and many many more - Mark Burnett. A Physical Test by the amazing Fitness Celebrity Billy Blanks. His talk to the players after the workout has an eery premonition that will truly test their character. Games against West Ham United, Fulham FC, Thurrock FC, and the American Opponents on their way to achieve The Ultimate Goal will keep you on the edge of your seat. No guarantees except lose - and you are out - FOREVER.
If ever there was a story to inspire belief and make the impossible possible,

THIS IS IT - THE ULTIMATE GOAL