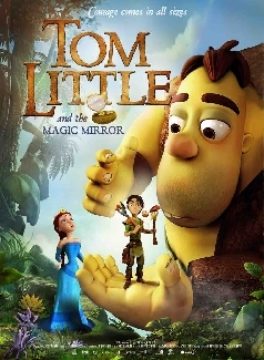 Tom Little and the Magic Mirror

TOM LITTLE AND THE MAGIC MIRROR. Magic comes in all sizes! Poor farmer’s son Tom Little may be small, but what he lacks in brawn, he more than makes up for in brains and bravery. When a magic mirror shows him the love of his life is no less than the beautiful princess, he is determined to win her heart.

Meanwhile, a vengeful witch has conjured up a giant tree covering the royal palace and destroying the court’s water supply. Having heard that the king is offering his daughter’s hand in marriage and half of the kingdom to the hero who can release the palace from this spell, Tom tries his luck against all odds.

While the strongest woodcutters fail, he manages to convince three magic tools from the enchanted forest to join him on his adventure. However, the witch is far from ready to abandon the field. Her first attempt to steal the magic tools is thwarted by a mysterious female thief who steals from the rich to help the poor. Tom has no idea that she and the princess are in fact the same person! But just when Tom is celebrated for cutting down the monstrous tree, the witch strikes back with an evil scheme…