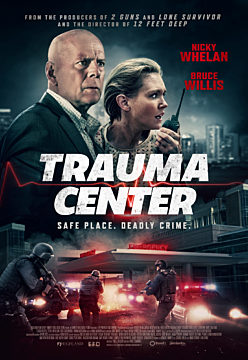 Former paramedic Madison Taylor (Nicky Whelan) is injured when caught in the crossfire of two corrupt cops, Pierce and Tull. She wakes up in the hospital and as a witness of one of their vicious crimes, she’s placed under the protection of the respected Lieutenant Steve Wakes (Bruce Willis). Her misfortune turns into a real nightmare when Pierce and Tull decide to finish the job, realizing she is the key to tracing them back to the crime. Trapped and hunted by Pierce and Tull inside the locked-down hospital, Madison desperately calls Lieutenant Wakes for help. But she must use her surroundings to fight back alone during this night of survival if there is any hope of making it out of the hospital alive…