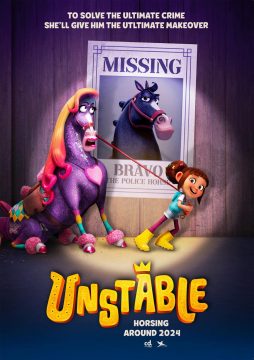 Bravo is a proud police horse who is tricked by his rider into assisting in the crime of the century: switch the Queen’s crown for a fake. Betrayed, Bravo goes on the run with the evidence and finds refuge in the garden of a little girl, Luna, who always wanted a real pony. It’s love at first sight, for her. But not for him! Luna and her crazy pets (who think they’re ponies too!) nurse Bravo and train him to win the local horse show. Bravo even gets a new name (Princess Lady Boots) and a sparkly makeover! But in his single-minded quest for revenge, Bravo selfishly puts Luna in danger.