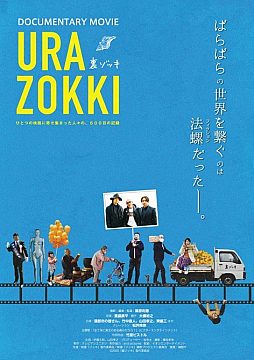 “ZOKKI" is a unique film directed by Naoto Takenaka, Takayuki Yamada, and Takumi Saito. It is a live-action adaptation of a short story collection by manga artist, Hiroyuki Ohashi. The people of Gamagori City, Aichi, where the film will be shot, were particularly happy in 2020 when the production started.

For the past eight years, volunteers from Gamagori, including printers, bakers, and pubs, have been working to bring the film to the city, and now the city of Gamagori has decided to get involved and fully support the film "ZOKKI"!

A number of happenings occur in the once peaceful place of Gamagori. The film was shot by a gorgeous cast and staff. And a group of amateurs struggle to somehow make the film more exciting. “URAZOKKI" is a story about the "behind-the-scene" of a group of people who come together to make a film. That’s what the film was supposed to be like....

The overshoot of the COVID-19 hit the world after the location was completed. In April and May, a state of emergency was declared. It was the first time in the postwar era that a movie theater was closed for two months. The lives of the filmmakers who had made their living from movies also changed forever. Needless to say, the town of Gamagori is disappointed, and the people who had devoted their hearts to film were forced into a difficult situation. And just before the film's release in March 2021, the second wave of the COVID-19 struck the world. This is a time when the goal of "deliver the work" is threatened. This is a record of the ongoing lives of people who’re involved in producing and releasing a single film.