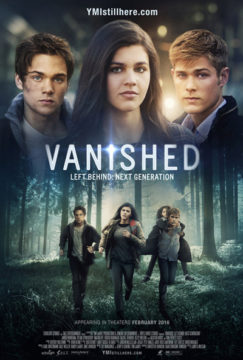 Vanished Left Behind : Next Generation

With every Christian suddenly "vanished" from the world, headstrong 15-year-old Gabby is thrust into adulthood way too soon, along with her younger sister Claire and the two teen boys, Josh and Flynn, vying for Gabby's attention. Will the group be able to navigate a dangerous new world ruled by those who've been left behind?

YOUR JOURNEY STARTS HERE Based on the upcoming movie Vanished Left Behind: Next Generation, the Vanished Underground is a community-driven game that puts you in the middle of the Vanished story and challenges you to follow the same journey as the characters in the movie. Build your team, reach new levels, win prizes along the way, and qualify for a trip to join the cast on the red carpet for the Hollywood premiere! Join today and get involved in a game that may just change a life…forever.