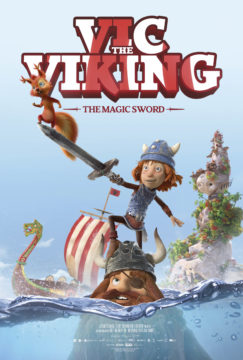 Vic the Viking - The Movie

Vic would love to accompany his father Halvar on his adventures. But Halvar thinks Vic is too small and too feeble for the rough life of the 'strong men' on board. However, Vic has other qualities: He has a bright mind and thinks before he acts! The adventure begins when Halvar wins a magic sword from Sven The Terrible. And, it proves to be uncontrollable: Ylva, Vic’s mother, is transformed into a statue of pure gold. Vic is determined to save her with the help of Leif a young warrior, Ylvi and a rather unconventional squirrel help him. Leif knows of a legendary island where the magic of the sword can be broken. The journey there leads our heroes to "Pirate Paradise" and gives them a hair-raising rendezvous with the most powerful storm waves on earth and brings them to the end of the world. And of course, Sven The Terrible follows them in order to get his lost sword back. Only when they have reached the island Vic realizes that Sven is not their biggest problem. The real danger is hidden among them and the effort is enormous: The fate of the whole of mankind is at stake...