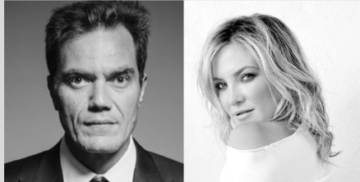 Acheron University’s annual Literary Convention came to the harsh reality it’s not as prestigious as it used to be. With attendance on a steady decline, there are talks of cutting the convention completely. SIMONE (Hudson), a dedicated, no-nonsense, erudite English professor, has the perfect solution: SHRIVER, the most cloistered novelist of all time. Her peers believe him to be dead, but Simone’s convinced he’s coming to save their program.

Meanwhile in New York, a drunk, hapless man who happens to also be named SHRIVER (Shannon) receives an invitation to a writing convention at Acheron University. Although this Shriver has never written anything in his life, he accepts the invitation in hopes of being rewarded the grand prize of a car. The conference enthusiastically welcomes a now nervous and regretful Shriver. It doesn’t take long for Shriver to grow into his new writer persona, leading panels, giving inspirational speeches and even falling for Simone. However, when a Rolling Stone journalist releases an article on the convention, it sends an uproar in the literary world and puts Shriver’s real identity, and chances with Simone, at risk. The harder Shriver tries to prove he hasn’t stolen another man's identity, the more he convinces himself that he might be the real Shriver. That is, until he’s inevitably faced with the actual literary genius. When both men claim to be THE Shriver, who will everyone believe?