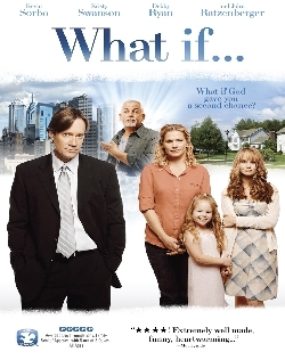 What if... tells the story of Ben Walker (Kevin Sorbo), who fifteen years ago left his college sweetheart Wendy (Kristy Swanson), and his passion to be a preacher, in order to pursue a business opportunity. While on a thrill ride outside the city, his new car mysteriously breaks down, and he's visited by a tow truck driver named Mike (John Ratzenberger) who claims to be an angel. Suddenly Ben wakes up to find his "wife" Wendy and daughters (including Disney Channel's Debby Ryan) are getting ready for church, where Ben is the new pastor. Before he can get back to his old life, Ben must first embrace this new reality. In the tradition of "It's a Wonderful Life" and "The Family Man," What If... is a story of finding your true purpose in life.