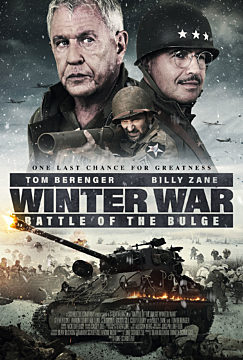 With terrible weather and the advancing enemy. Lt. Colonel McCulley (Berenger) and General Bradly (Zane), meet together for a briefing of what they can do to help stop the Germans advancing. A plane is dispatched to see the exact enemy locations. Lt. Cappa has been thrust into a do our die position. Having escaped the clutches of his German captors, Cappa must gather what men and resources he can. With limited supplies, food or ammo, Cappa is chased by the Germans through enemy lines. Eventually finding his way into the allies’ largest fuel supply depot. After confirming the Germans location via air. Lt. Colonel McCulley and General Bradly, decide on a plan of action to find and locate the Germans. Cappa meets up with Sergeant Harris, who shows Cappa the depots defensive positions. Cappa decides the best orders would be to blow up the depot, leaving nothing for the Germans. A group of US Army military police arrive, led by ruthless and cunning Lt. Sheppard. Sheppard reunites Cappa with his lost squad mates, Jack and Rudy. Cappa is fortunate to be reunited with his friends but has mixed feelings about Lt. Sheppard and his police force. Eventually Cappa is ordered out of the depot, leaving it in the care of Sheppard and his men. Upon discovering his old Friend Captain Daniels, Cappa discovers that Sheppard’s and his military police are not who they seem. And a final battle between Cappa, Sheppard and the Germans ensue.