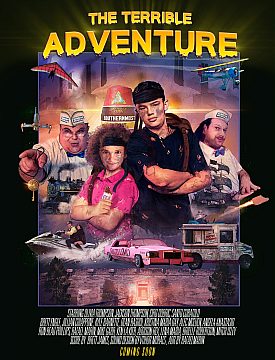 When two affluent siblings are faced with losing everything, they spring into action attempting to conquer a contest put on by billionaire Billy Branson.

When tasked with taking 'action' by an elementary teacher as a summer project, two affluent and spoiled siblings face their Dad's bankruptcy and parents' divorce by attempting to win the most complicated contest of all time. It's a contest used to cultivate the world's greatest talent to seed a special task force and head up a non-profit organization to address global issues such as climate change, pollution and world peace - with a cash prize of $1,000,000. The clues and contest take the children across the great state of Florida, highlighting the challenges faced on the land, air and sea by humanity. Each location, from the Southernmost Point at Key West to the United States' oldest city, St. Augustine has a clue and relevance to the puzzle. The kids are faced with escaping from their house to solve each clue however the Ice Cream Men are never far behind. The Ice Cream Men, Chilly and Ice Man, will resort to any means necessary to win the puzzle and the million dollars. The contest takes them to many of Florida's greatest locations. Starting at the Florida Ridge the duo use a hang-glider to narrowly escape and discover a clue from the air leading them to a low-speed Cadillac-boat and pirate ship chase to discover the second clue at the Alligator Lighthouse. Their third clue points them to the Southernmost Point of the United States in Key West. After giving up and heading back to their house, Jackson secretly solves the riddle and the siblings take an Amtrak to solve the final clue for a showdown in St. Augustine, Florida at the Castillo De San Marcos. Although a far cry from their spoiled roots, the two use their ingenuity to overcome obstacles and save their house.