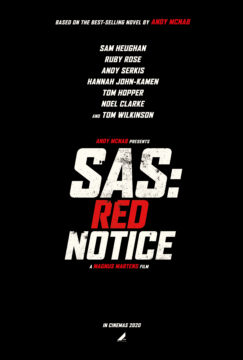 Tom Buckingham is an operator in Britain’s Special Air Service, an elite, clandestine unit referred to as the Regiment. Today the only secret Tom is keeping is the ring in his pocket. He is taking Dr Sophie Hart from London to Paris to propose. When they are deep inside the Channel Tunnel a small army of private military contractors, led by Grace Lewis, seizes control of the train, taking hundreds of hostages at gunpoint. These mercenaries -- The Black Swans -- have been accused of crimes against humanity, but the truth is far more explosive. Their plan: blow up the Channel Tunnel and declare economic war on a government that has its own fair share of secrets to keep. Alone and injured, Tom Buckingham is the only chance the passengers have to get out of the tunnel alive and Dr Sophie Hart must keep them breathing until he succeeds. By the time Tom reaches France, he realizes their survival requires him to embrace the very psychology that made Grace a hunted war criminal.

Based on the best-selling novel by former SAS operator Andy McNab, SAS: RED NOTICE is an authentic portrayal of an SAS emergency response operation and the larger machinations that underpin that action.